My Journey To Success With Woman King Star Thuso Mbedu

Emmy-award nominee and Woman King star Thuso Mbedu has been a force to be reckoned with since she started her acting career in 2014. Eight years later, the world has bowed with respect to her craft, talent and hard work. And this is just the beginning. We reflect on her journey to success

Please give a sneak peek into your childhood. What sparked your interest in the arts?

I was always a quiet child who found solace in books and learning. I have always been a reader with a vivid imagination. When we were in primary school and were given a challenge of reading 100 books, I read over 200. In high school, we had to choose our subjects when we got to Grade 10 and I chose mathematics, physical sciences, biology and drama. I had chosen drama as the subject that would give me a break from the hard subjects of maths and science, but then I fell in love with it. In Grade 11, I wrote and directed my own productions. I started writing poetry, which was meant to be for my eyes only, but there was a poem I wrote and performed that left the whole auditorium in tears. In matric, I directed Sue Pam Grant’s Curl Up and Dye for the House Plays and we won the best overall production. I did a bachelor of arts in dramatic arts degree at the University of the Witwatersrand (Wits) and I passed my honours cum laude.

Did your family support your dreams of being an entertainer?

Not initially, but they do now. My mother had been a maths, science and geography teacher—she had wanted to be a geologist but couldn’t be because of apartheid. My father had been a maths and science teacher and I guess I was expected to go the medical route, so it was a shock for everyone when I didn’t. After I told my grandmother that I wanted to do drama in university, she didn’t talk to me for about a month. But after I got good grades in acting, my grandmother couldn’t hide her pride in me. Also, her heart was also put at ease in 2012 when I got a scholarship from Wits that sent me to New York as part of the NYU/Wits exchange programme.
However, when I completed my degree and my grandmother couldn’t do much to support me as she was a pensioner, I had an aunt tell me to look for a “real job” as I had had fun with the acting thing. I put some money away and left home with a large suitcase and R500 and came back to Johannesburg knowing that I would crash with a friend of mine for a week and God would have to make a plan beyond that. God came through for me, as my family could not support me financially as well. I think they still had doubts even when they celebrated seeing me on TV when the first season of Saints and Sinners came out.

How did you get into acting? What was your first major role and how has your journey been?

I studied drama at Wits (2010-2013). During my time, I acted in theatre pieces in 2011. From second year, we were allowed to be in theatre productions. I worked with Gys de Villiers in a devised piece called Aquamine, which was a very memorable stage production for me as it was full of seniors that I looked up to at the time. In TV, my first major role came after graduation as I wanted nothing that distracted me from my studies while still in varsity. I landed my first role after my second audition. My first audition was for the latest Soul City and I got the role there, but before they had gotten back to me I had gone to audition for Mbalemnyama, which South Africa now knows as Saints and Sinners. I had to choose between the two roles because both were lead roles.

What is the ultimate role you want to play?

I would love to be in anything created by Shonda Rhimes. When talent, dedication and creativity meet research, greatness is inevitable. I am in awe of everything she has shared with us, from Grey’s Anatomy to Scandal (The Fixer) to How to Get Away with Murder to The Catch. I know that it would be a great challenge to bring to life any character that has been created on paper and I am constantly running after challenges. That is how I grow.

What are some of the challenges and highlights you have experienced as an entertainer?

My biggest challenge to date has been chilling at home without work for extended periods of time because of the unstable nature of the industry. However, the tough times have made me stronger as they have forced me to take initiative and work on my own things rather than relying on the next gig. I have to create the next gig for myself.
The highlights are knowing that I have touched people through my craft. Also, I always say “you’re only as good as your last performance” and so I constantly challenge myself to do better and be better. When people respond positively to that it is always humbling: the hard work is not in vain.

How would you define success and have you received it?

Success for me is living in purpose and maintaining your peace while doing so. Living on purpose is a journey. It has its great days, but there are low moments as well. Where I am right now, I can truly say I am in peace and joy as I feel as though I am aligned with what I was created to do. There are a lot of other things I have yet to do, but I know that I am growing every day and every new experience, good or bad, brings me that much closer to making a lasting difference and helping this generation and the next. I am living success every day. I love what I do. Every. Single. Day.

What are your long-term career plans?
You will always see or hear of me in different capacities. I want to get into directing and producing so that I don’t have to wait for work anymore. I want to create a work that interests me rather than going with the flow because I need to pay the bills. Just watch this space. However, all in all everything that I do has helped me achieve my ultimate goal to open a creative arts academy and orphanage for orphans.

What is your advice to other aspiring actors?
Work on your craft. There is no way around it. I still have lengthy discussions with my director and colleagues about how to better myself. I still read up and take notes on how to improve my craft. I know that S’dumo Mtshali sets time aside to meditate on his roles and prepares himself both mentally and physically so that he can make the best offer. If you put in the work, your work will speak for you. I have no time for people who want to take shortcuts and are only doing it for the fame. You become famous and then what? This industry is not for the faint-hearted. You’re going to experience a few knocks, and training gives you the muscles and strength to get back up again. 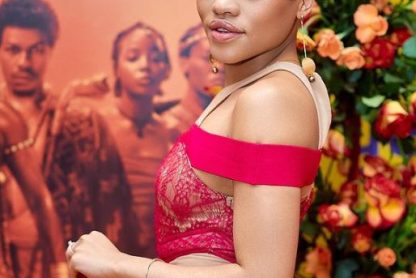 My Journey To Success With The Woman King Star Makgotso M